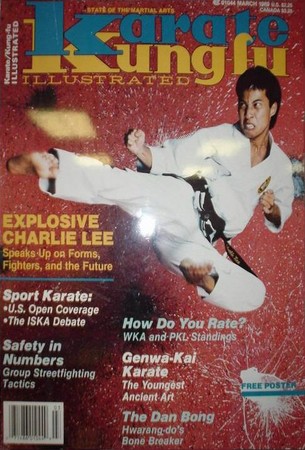 Charlie Lee began martial arts with Grand Master Jhoon Rhee in 1969. Mr. Lee currently holds the rank of 7th Degree Black Belt in Tae Kwon Do. In 1983, Mr. Lee began competing on the Karate World Tour and became the NASKA World Champion in a period of three short years. Mr. Lee held the NASKA World Title for five consecutive years and was inducted into the Black Belt Hall of Fame in 1986, a honor bestowed on martial artists such as Jhoon Rhee, Bruce Lee, Chuck Norris, Billy Blanks, and other pioneers and world champions. He was also a member of the 1983 and 1985 World Champion U.S. Karate Team, and has competed and performed worldwide.

Mr. Lee is one of the most sought after martial artists in North America, and frequently conducts seminars throughout the nation. He has appeared on six martial arts magazine covers, has been featured in several publications, including The Washington Post, Money Magazine, the ABA Journal, and has appeared on ESPN, ABC, and NBC. Mr. Lee promotes the World Series of Martial Arts, one of the largest martial arts tournaments in the country.

Mr. Lee is a graduate of Virginia Tech where he received his BS degree in Business. After receiving his degree, he attended the Washington College of Law at American University where he received his law degree. Mr. Lee is currently a practicing attorney and a founding partner of the Tysons Corner law firm of Moore & Lee, LLP, concentrating his practice in construction law and federal and state government contracts.