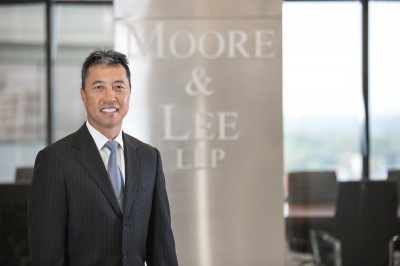 Moore & Lee is listed in the Chambers Guide to the World’s Leading Lawyers, USA, AV rated in Martindale-Hubbell®, The Bar Register of Preeminent Lawyers, The Legal 500® for Real Estate and Construction, and Super Lawyers®.

Chambers, USA, “America’s Leading Lawyers in Business” lists Mr. Lee as one of the leading lawyers in Construction Law.

Mr. Lee was selected as a Fellow by the Advisory Board of the Litigation Counsel of America.

In addition to his litigation practice, Mr. Lee manages and coordinates legal matters on behalf of clients with a nationwide business presence. In that capacity, he oversees and coordinates the efforts of numerous outside counsel to ensure that unified and consistent positions are asserted on behalf of the client, that effective and efficient legal strategies are employed, and that legal spend is controlled. He regularly counsels clients regarding policies and procedures for multi-layered national corporations, including effectively minimizing litigation risks. He frequently lectures clients and industry professionals about litigation trends, recent case law, and best business practices to avoid litigation altogether. Mr. Lee is uniquely qualified to analyze, edit and revise legal documents that address current issues such as arbitrability, indemnification, waivers, risk allocation, limitations on liability, subrogation, and other current matters. He routinely assesses and manages liability and contract risks for owners, developers, contractors, sureties, REITs, self-insured corporations and insurance carriers providing primary and excess coverages. Mr. Lee’s experience allows his clients to effectively and efficiently manage risks in prosecuting and defending claims and lawsuits as well as provide stability and general predictability of exposure, if any. Additionally, Mr. Lee effectively provides advice and counsel regarding public relations in high profile cases.

Finally, Mr. Lee has the privilege to serve as an arbitrator on the Construction Panel and Sports Panel for the American Arbitration Association.

Dear Charlie: [J]ust a short note to express my gratitude for the way you handled yourself in the mediations yesterday. Your demeanor and professionalism went a long way in getting the cases settled, especially given the fact that you were dealing with a tough and potentially volatile plaintiffs’ counsel. I have been around the court system for more [than] 50 years as a trial lawyer, trial judge, and Iowa Supreme Court justice. During that time I have dealt with hundreds and hundreds of lawyers. In demeanor and professionalism, in my book, you rank among the best of them. It was a pleasure working with you, and I hope our paths will cross again.

While I was General Counsel at Emeritus Corporation, a publicly traded healthcare company with more than 30,000 employees, Charlie Lee and his team at Moore & Lee were an indispensable partner of ours. My confidence in them was and remains unshakable. Their intimate knowledge of the long-term care industry and related litigation risks, combined with Charlie’s unique ability to read people, understand the importance of nuance in litigation, and negotiate the best outcomes, unquestionably saved us millions of dollars.

The legal process in this country is characterized by procedural complexity and potential conflicts of interests that don’t always serve the client’s interests. The role that Moore & Lee played in managing our defense counsel around the country resulted in lower overall cost and the best possible outcome. Charlie’s knowledge of and relationship with defense counsel, the plaintiffs’ bar, and the judiciary across the country enable him to bring about results that no other lawyer or law firm can so consistently achieve.

Mr. Lee is a former five time world karate champion, a member of the Black Belt Hall of Fame, and holds a 8th degree Black Belt in Tae Kwon Do.